Six things we learnt about Brexit at the Conservative Party Conference 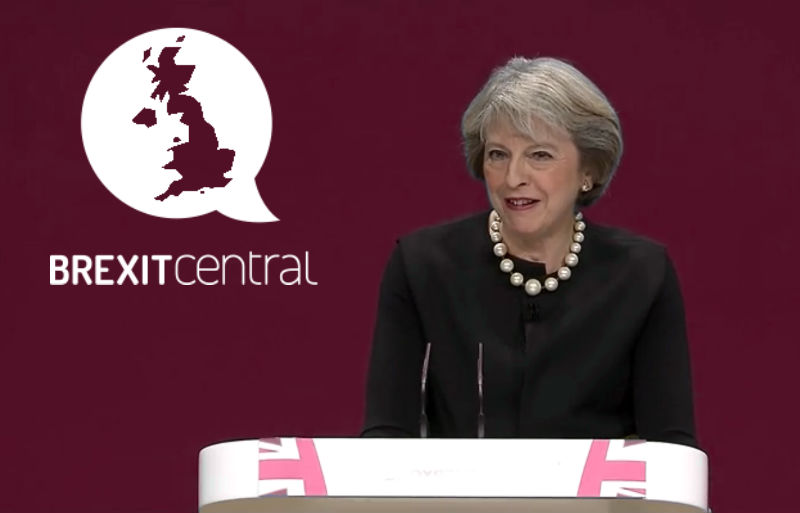 A variety of voices ramped up the pressure on the Prime Minister in advance of the Conservative Party Conference for more details about what Brexit will involve.

And after four days in Birmingham, we do have a bit more clarity. Here are six things we learnt during the gathering in Birmingham.

The key piece of news briefed out for last Sunday’s papers was that Article 50 will be invoked “no later than the end of March next year”. This allows for allows sufficient time for a negotiating strategy to be developed and people to be put in place for the negotiations while avoiding setting the two-year clock ticking before objectives have been agreed. It means that we can expect to be out of the EU before the next European Parliament elections due to take place in June 2019 – a timescale that I found to be almost universally acceptable.

2. A Great Repeal Bill will be included in the next Queen’s Speech

Theresa May announced that a Great Repeal Bill will be included in the programme for the next parliamentary session, to be announced in the Queen’s Speech next spring. This will remove the original European Communities Act from the Statute Book, coming into effect on the day we formally leave the European Union, ending the authority of EU law in Britain. However, the bill will also convert all existing EU law into British law, meaning there won’t be any sudden changes to anyone’s legal obligations on day one as a sovereign nation. Mark Littlewood argues on the site today for a sunset clause to be included in this legislation, lest we remain encumbered with unnecessary regulations for the long term.

Clearly, there will need to be a comprehensive review of what to repeal, accept or amend post-Brexit, but my instinct is that those debates are best left for the time when Britain is a sovereign nation once again, lest they detract from the delivery of Brexit. Indeed, the Prime Minister asserted that “existing workers’ legal rights will continue to be guaranteed in law… as long as I am Prime Minister”. A refusal to do so could have, for example, given the unions and their political allies an excuse to resist Brexit taking place at all.

3. The Government will robustly fight the spurious legal challenges to the Brexit process

Those using the courts to claim that there should be votes in the House of Commons and House of Lords before Article 50 is triggered are getting the full force of the Government contesting their cases. Theresa May said of those responsible for these challenges:

She is sending Jeremy Wright MP, the Attorney General himself, to lead the Government’s legal team for the court hearing scheduled for later this month.

4. Remoaners reluctant to accept the referendum result are getting short shrift from Number Ten

The Prime Minister could not have been clearer when she declared:

“Even now, some politicians – democratically-elected politicians – say that the referendum isn’t valid, that we need to have a second vote… But come on. The referendum result was clear. It was legitimate. It was the biggest vote for change this country has ever known. Brexit means Brexit – and we’re going to make a success of it.”

5. The Tory Remoaners – while vocal – appear to be a very small band

It really has been a very small number of government backbenchers making the running in the media with resistance to the delivery of a clean Brexit. Anna Soubry and Nicky Morgan have led the charge, with back-up from Nick Herbert, Neil Carmichael and Ken Clarke; and while no Prime Minister or Chief Whip will be complacent when their working majority is only just into double figures, the power of the grassroots in this should not be underestimated.

The very muted reception given in the conference hall to noted Europhile Lord Heseltine (not there on EU business, but introducing the new candidate for Mayor of the West Midlands) could not have been more different to that afforded by attendees when Theresa May simply declared: “Britain is going to leave the European Union”. The party faithful will not take kindly to those trying to reverse the democratic will of the electorate and their role in selecting candidates should be borne in mind, especially given the impending redrawing of the boundaries and associated jostling for a smaller number of seats.

6. The Prime Minister rubbishes the concept of “soft” Brexit and has already set some red lines for post-Brexit arrangements that would be unacceptable

Ever since the referendum, the media had been getting into the habit of asking all-comers whether they were in favour of so-called “soft” or “hard” Brexit. Theresa May helpfully nailed the ludicrousness of this question when she said:

“There is no such thing as a choice between “soft Brexit” and “hard Brexit”. This line of argument – in which “soft Brexit” amounts to some form of continued EU membership and “hard Brexit” is a conscious decision to reject trade with Europe – is simply a false dichotomy. And it is one that is too often propagated by people who, I am afraid to say, have still not accepted the result of the referendum.”

She was right that this terminology is being promoted by those who favour what I would call “phoney Brexit” – i.e. a position where we do not regain control of our laws and our border or rediscover the power to make our own trade deals. Indeed, one of those, Stroud MP Neil Carmichael, shifted from using “hard Brexit” to “harsh Brexit”. I think the term “clean Brexit” more helpful if you will insist on an adjective.

As to red lines already announced, the Prime Minister insists that we must regain control of immigration and shun any jurisdiction of the European Court of Justice over the UK. The former is the reason why single market membership is off the table since that would involve accepting freedom of movement for EU nationals.

And as for positive proposals, the Prime Minister gave us the following guidelines:

“I want it [the new relationship] to include cooperation on law enforcement and counter-terrorism work. I want it to involve free trade, in goods and services. I want it to give British companies the maximum freedom to trade with and operate in the Single Market – and let European businesses do the same here.”