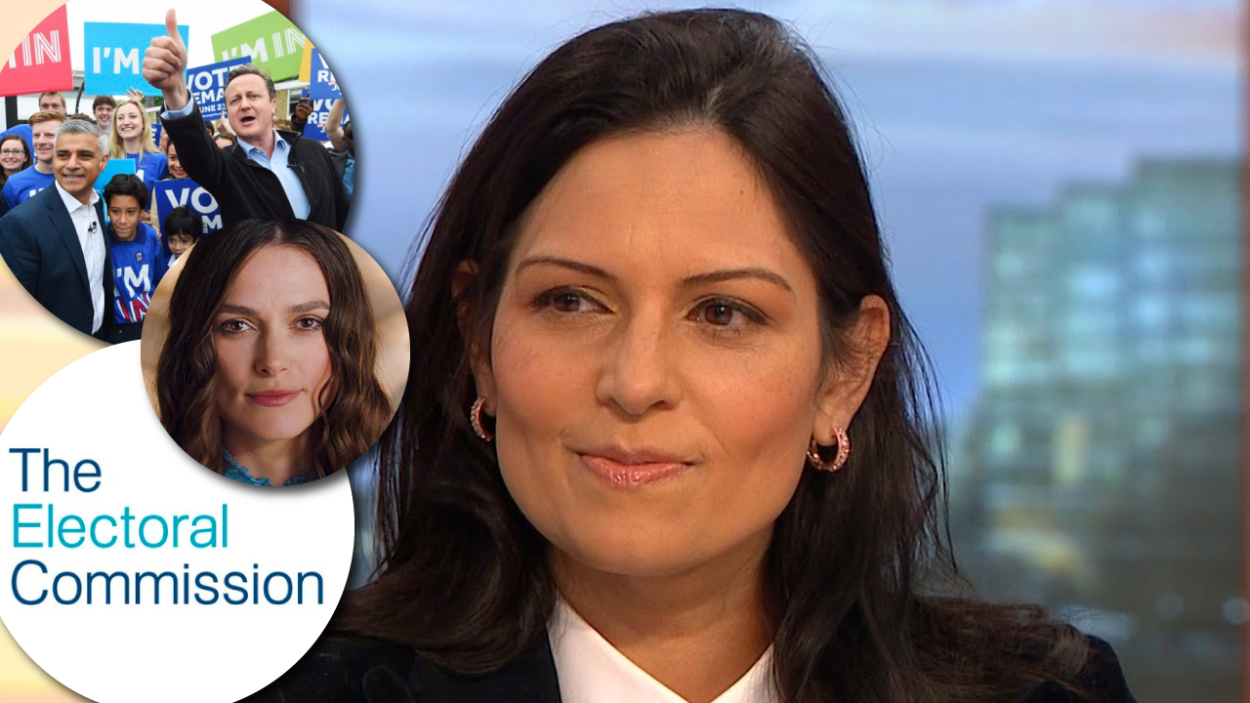 Priti Patel has been Conservative MP for Witham since 2010 and has held several ministerial roles, including Secretary of State for International Development between July 2016 and November 2017 and Home Secretary since July 2019. She was a backer of the Vote Leave campaign during the referendum.

Following the Sunday Telegraph article which raised fresh concerns of coordination between Remain campaigns, I am writing to you to provide additional evidence of how these campaigns had a ‘common plan’ over the production and distribution of the ‘Don’t F**k My Future’ videos in question.

I am encouraged that, in response to the article, you stated you will ‘consider [the allegations] in line with [y]our enforcement policy.’ Given the importance of the issue and the need for this to be looked into in detail, I have gathered together evidence to aid you in your investigation and to make clear how this coordination was in breach of electoral rules.

As you will be well aware, Electoral Commission rules state that if campaigns are working together and have a ‘common plan’, they are subject to ‘joint campaign rules’. This means that, if one of the campaigns is a designated organisation – in this case Britain Stronger in Europe – the cost of the campaign counts towards the designated organisation only. Indeed, Electoral Commission guidance dictates that ‘you are very likely to be working together if you have joint advertising campaigns, leaflets or events’ (Electoral Commission link). This rule ensures that designated campaigns cannot outsource the costs of the advertisement to another campaign in order to circumvent its spending limit.

Coordination of production and distribution of the advertising campaign

Having looked through the documents on the Electoral Commission’s website, I note that, according to Adam & Eve/DDB’s returns, producing these advertisements cost in excess of £76,000. However, only one campaign – Wake Up And Vote – ever paid an invoice to DDB for producing the videos, and only for £24,000 (link). The remainder of the cost appears to have been funded by a mixture of payments and donations from other campaigns and major Remain donors.

Wake Up And Vote

Britain Stronger in Europe, Wake Up And Vote, We Are Europe, and DDB were all registered as independent campaigners in their own right but none declared this as joint spending. Despite only one campaign paying an invoice for the advertisements and registering this with the Electoral Commission, multiple campaigns were reported to be involved in producing the videos:

Questions over the creation of Wake Up And Vote

There are legitimate questions over the reasons behind the establishment of Wake Up And Vote, and the subsequent funding it received. It registered with the Electoral Commission as a permitted participant on 24 May 2016, less than one month before the referendum. It received a sole donation of £100,000, despite having no unique campaign messaging or evidence of prior campaigning in the referendum – surely a prerequisite for being given such a large donation. The donor was Lisbet Rausing, who also gave money to Britain Stronger in Europe and Conservatives IN. This begs the questions of how Ms Rausing found out about Wake Up And Vote, what persuaded her to donate such a large sum to a campaign with no distinct message, and indeed whether Ms Rausing was in fact directed to give money to Wake Up And Vote by senior figures within the official Remain campaign as it was close to its spending limit.

Again, this evidence of coordination between campaigns goes a long way further than claims made against Vote Leave, of which the Electoral Commission is currently investigating. Not only did Remain campaigns use the same supplier, but this supplier was itself a registered permitted participant.

The establishment of Wake Up And Vote so close to referendum day was by no means unique, nor are its close ties with Britain Stronger in Europe. As detailed in my previous correspondence with you, four other Remain campaigns registered as permitted participants in the last month of the campaign: Best for Our Future Ltd, DDB UK Ltd, Proud Robinson Ltd and Virgin Management Ltd. These campaigns received hundreds of thousands of pounds in donations from figures who had previously donated money to Britain Stronger in Europe and other Remain campaigns. It is remarkable that close to £1 million was donated to these organisations which had no prior record of campaigning in the referendum and had no distinct message from the official Remain campaign. Indeed, much of this money was spent on advertising, yet there is no evidence that they had unique messages which sought to target a different audience to Britain Stronger in Europe. It is therefore wholly reasonable to believe that these campaigns were set up for the sole purpose of Britain Stronger in Europe evading its spending limit, with a ‘common plan’ in both their messaging and audience.

As this evidence reveals, there is clear reason to believe that Britain Stronger in Europe avoided breaching its spending limits by channeling funds through smaller Remain campaigns which were set up less than a month before the referendum vote. These campaigns received donations for figures who were known to Britain Stronger in Europe, shared advertising agencies, promoted each other’s adverts and exhibited no clear difference in their messaging – all evident indications of a ‘common plan’. All this evidence is far more serious than the accusations made at Vote Leave. I again implore you to show equity. You must either open an investigation into Britain Stronger in Europe, or – if you believe that the material detailed above is not evidence of a ‘common plan’, you should end the investigation into Vote Leave.

I look forward to hearing from you.