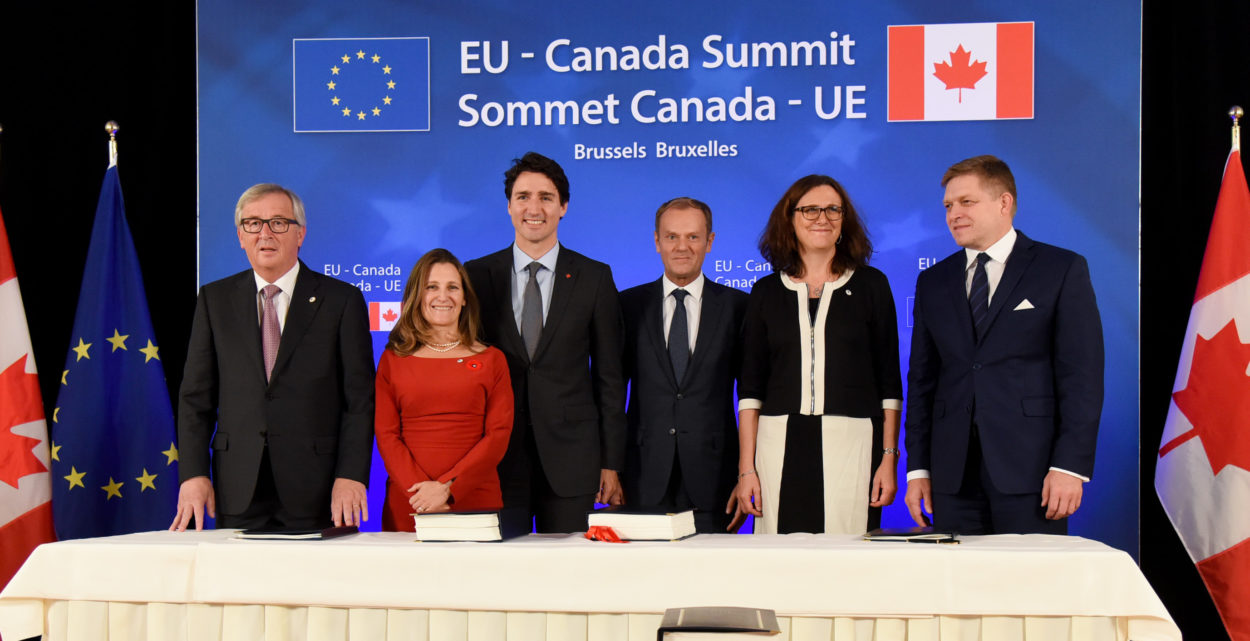 David Campbell Bannerman was MEP for the East of England between 2009 and 2019, where he was latterly the joint Spokesman on International Trade for the Conservatives in the European Parliament, and author of the ‘SuperCanada’ model. He was Co-Chairman of Conservatives for Britain and is now a Board member of Leave Means Leave.

Tomorrow, on Valentine’s Day, Canada is due to give the EU a proposal to which it should say yes, after a great deal of maybes and outright nos. After seven years of on/off overtures, a break up over the EU trying to dictate human rights to Canada, much emotional confusion with the US deal TTIP over Investor State Dispute Settlement (ISDS) procedures (which sounds more like a divorce than a relationship), and the near rejection owing to opposition by a place called Walllonia (part of Belgium), CETA – the Canada-EU Comprehensive Economic & Trade Agreement – will be approved, subject to any last minute hysterics at the European Parliament altar from anti-free traders.

On one day – probably 31st March – no less than €500 million of tariffs on EU-wide goods will disappear overnight. The UK stands to gain over £1.3 billion a year and more in sales from cars to beef and dairy sales, already rising. Our taste for moose meat may be limited, but Canadian shellfish and other meats will be cheaper for us too.

CETA opens up the EU Single Market to Canada almost in its entirety – 99% of non-agricultural tariffs go and 92% agricultural tariffs also. Barriers on numbers imported called quotas are to be far more generous. The government provinces of Canada are to be opened up to our service industries, and for the first time maritime services.

Despite all the rhetoric banded around by EU negotiators, all this market access is delivered with no requirement for Freedom of Movement: no moving in together and no access fee or dowry payable to the EU.

We are Germany, Poland and Ireland’s second largest export market in the whole world, for example, and overall we have a trading deficit at £70 billion larger than many entire economies – the goods deficit of £56 billion is larger than the entire Kenyan economy, for instance. We also have the largest financial centre in the world in London and its web of specialist services to which EU companies want access.

So is CETA the right model for Britain? Pretty much yes. I believe a deal bigger, better and wider than CETA but based on it – what I term ‘Super Canada’ or others call ‘Canada Plus’ (seen on that famous leaked memo photographed in Downing Street) – is indeed the way to go. Unlike newer coverts, I have spent nearly 10 years working on alternative models including the viable EEA-Lite option (the EEA agreement stripped of Single Market membership, ending Free Movement and free of the European Court of Justice) in my book Time to Jump.

But I think the British people now want the loosest form of association possible, a new partnership that ensures the UK can take back control of its democracy, laws and borders.

The Prime Minister’s excellent Lancaster House speech sent me over the moon as a long established Brexiteer – as we are to leave the Single Market and Customs Union with a clean break that rules out ‘bits’ of the EU such as the Norwegian EEA option, but was also notable in its signpost language, picked up too in the most welcome White Paper.

CETA meets the criteria for a ‘new comprehensive, bold and ambitious free trade agreement’ and is accompanied by a ‘strategic partnership’ agreement – a political deal which establishes regular co-operation and meetings in non-trade areas such as defence, security and foreign affairs. All very sensible: friendly trade and co-operation whilst being no threat to Canadian sovereignty. When I met Canada’s Foreign (then Trade) Minister Chrystia Freeland in Ottawa she said CETA would make Canada part of a ‘Common Market’ but not the Single Market. It drops the ‘will obey’ bit, then.

When I raised the notion of using CETA as a good basis for a UK deal with Trade Commissioner Cecilia Malmstrom in the trade committee last month, she amazed me with her warm response. Previously I was rebuked for Britain negotiating pre-Brexit trade deals as “a very hostile act”. This time romantic flirtation was in the air: “And yes Mr Campbell (I live in hope my full name may be used one day in Parliament). yes why not a role model for also the UK, even if I think that will be hopefully take slighter less time to negotiate”, she joked.

But basically, yes. Yes to a deal without freedom of movement but with 99% non-agricultural market access, yes to paying no access fees. Yes to being shorter too: if we start where we are as EU member with no tariffs, no quotas and fully compliant with EU laws, it could be very short indeed. Trade people in the EU actually like making deals and we should ensure they call the shots in negotiations.

CETA also marks a key anniversary because if it fails now, it would follow the abandonment of the EU-US deal TTIP, the frozen India deal (I am the lead Standing Report writer on this but I might as well as sit down), the refusal to start with China owing to human rights and now 18 years without signing a deal with the Gulf states, and all hope of the EU ever concluding any trade deal will be lost. If so, the UK might as well not start any negotiations and just embrace the guaranteed World Trade Organisation (WTO) Rules deal which six out of 10 of the EU’s largest trading partners have with the EU now, including the USA, Japan, Russia, China and India.

So while I believe our Government should plan for this fallback position of WTO Rules – Business for Britain estimated we would have to pay £7 billion in legally allowed compensation but still be better off out of the EU by saving £12 billion net contributions a year – we should aspire to a Super Canada deal with the EU based on CETA.

Call me romantic, but a Super Canada deal would be based on hard reality and not just on delicate hints.