500 years after Martin Luther challenged the power of the Catholic Church, Europe is still making the same mistakes 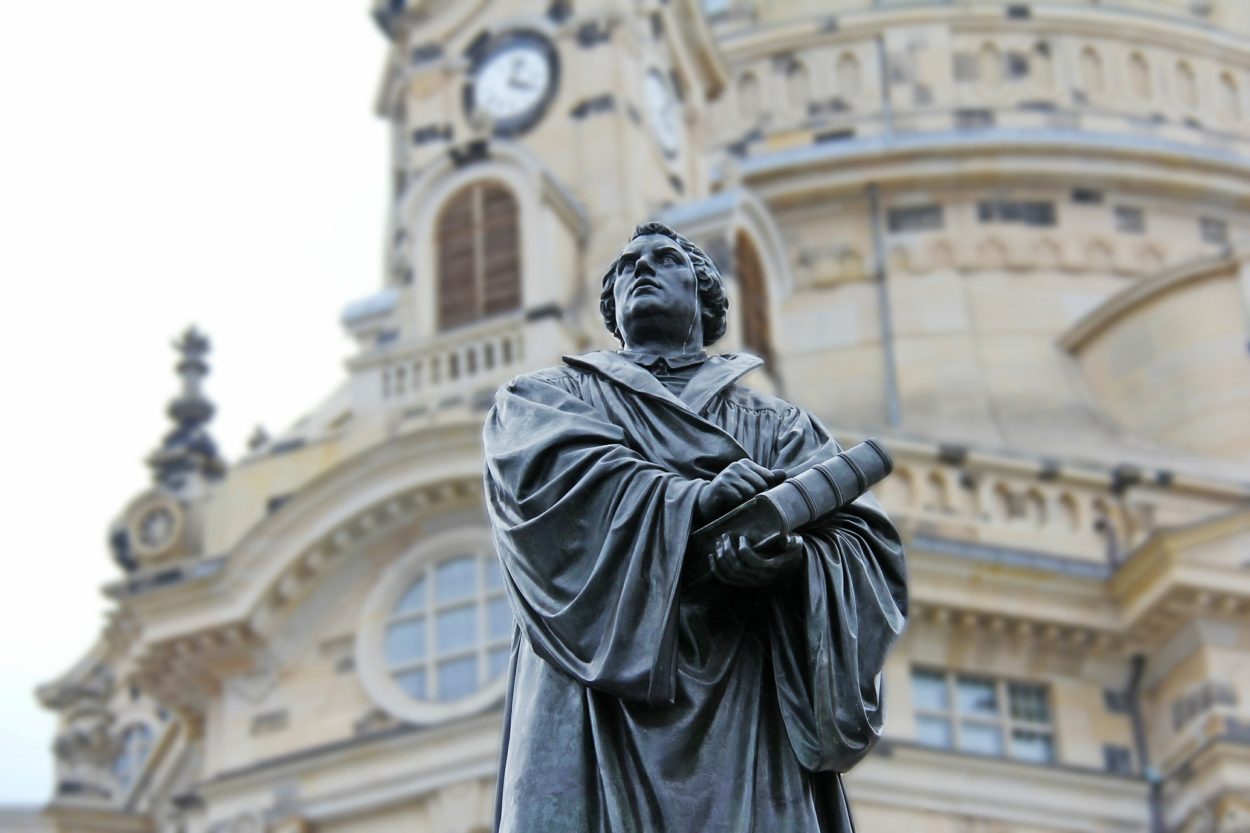 David Maddox is political correspondent of the Daily Express and studied Theology and Ecclesiastical History at the University of St Andrews.

On eve of the EU referendum, my wife – an Italian Catholic – and I were discussing how I was going to vote. She came up with an argument for voting Remain that I hadn’t heard in the long months of the campaign. It went along the lines of:

“Leaving the European Union is like leaving the Catholic Church. You can’t do it, it’s just wrong. In the end, unity is much better.”

The comment threw my mind back to my days at St Andrews University studying theology and ecclesiastical history when I devoted a part of my life to studying the Reformation – a breakaway from a centralising European power which still has repercussions to this day. While it created war and division, it also led to an unparalleled economic revolution in northern Europe and turned Britain into the world’s foremost geopolitical power. While Brexit may in the end turn out to be fairly small fry in comparison, the parallels with the Reformation and transformation it brought are remarkable.

It all began 500 years ago today. Martin Luther, a German monk and minor academic at a university which was trying to make a name for itself in a town called Wittenberg, nailed 95 theses to a church door complaining about the abuse of power from the authorities in Rome. At the heart of his complaint was what amounted to be a tax on the individual, with the Church selling indulgences to guarantee people’s path to Heaven so it could finance its grandiose project of building St Peter’s in Rome.

Luther was not the first “heretic” to stand out against the power of Rome but he was the first to succeed. A century before, the Czech Jan Hus was burnt at the stake in 1415 for expressing similar views and starting a similar revolution. Rather like Brussels today, the Catholic Church was keen to punish those who wanted to break away. A bit like Brexit, the reason Luther succeeded where Hus had failed was because his was a revolution led by disaffected members of the elite and he was aided by what then was new media.

In terms of “new media”, the invention of the printing press by Johannes Gutenberg around 1440 meant that for first time information could be reproduced quickly and spread around Europe at a rate never seen before. It is hard to believe now, but printing had an even more dramatic effect than the internet and social media and fuelled Luther’s Protestantism as a populist revolution. Pamphlets and news sheets were the Facebook and Twitter of their day.

Equally important, though, was the support of members of the elite. We saw with the EU referendum that while the result has been categorised as “populist revolution”, it was led by senior members of the governing party – Boris Johnson, Michael Gove, Priti Patel and so on. Even though they attacked the elite as a campaigning tool, it was hard to see them as being anything other than members of the elite themselves. Johnson had just stepped down as London Mayor and Gove was in the Cabinet while Patel and Andrea Leadsom were ministers. It is hard to see how the referendum could have succeeded without them.

With Luther it was leaders of the Northern German states, most notably his sponsor at Wittenberg University, Frederick the Wise, the Elector of Saxony. Instead of turning Luther over to the Church authorities or burning him at the stake, Frederick supported Luther. After the Diet of Worms in 1521 where Luther debated with the Church authorities, Frederick kidnapped him on his way back and held him in protective custody in a castle for two years.

The political leadership of the newly Protestant northern German states were almost certainly not supporting Luther out of a sudden bout of religious conscience; rather like Brexit, this was geopolitical not ideological for them. They wanted control over their own affairs, they did not want the Pope of the Holy Roman Emperor to syphon away taxes and tell them what to do. The parallels are obvious. This was the 16th century equivalent of wanting to strike their own trade deals, be free of a centralised bureaucracy and courts which imposed laws they did not want. Their motives may have been selfish, but without Frederick and his friends Protestantism would not have succeeded.

Which brings us onto England. The Boris of the 16th century was Henry VIII, a larger than life personality who changed his mind when opportunity for power beckoned. When Luther started off, Henry VIII wrote a tract against him and Protestantism siding with the Pope and Church in Rome. But, as we all know, when Rome wanted to dictate who he could and could not marry over the divorce of Catherine of Aragon, Henry VIII saw the Protestant light and brought the Reformation to England. Marriage was at the heart of power politics in the 16th century and controlling it was essential for control of domestic and foreign policies. Henry set himself up as head of the English church, a settlement that still defines our constitution.

While geopolitics defined the ruling elites, the ideologies still defined the populace. The Catholic counter reformation in northern Europe – and England in particular – had similar principles to the Remainers of today. They were theologically and ideologically linked to the central power of Rome and wanted to reverse the breakaway. More than anything the struggle for which destiny England and later Britain should take lasted until the end of Bonnie Prince Charlie’s failed Jacobite rebellion in 1745. More than anything it was this latter-day Remainer struggle which held Britain back from fully being able to take on the benefits of escaping Roman rule. Times do change, though: these days Remainers get to go on the Today programme; in the 16th century, Catholics faced a gruesome death.

The impact of this struggle is best illustrated by the 45-year reign of Elizabeth I. When she ascended to the Throne in 1558 England was bankrupt after a period of strife and uncertainty over which direction it would take switching between Protestantism and Catholicism. Her own survival was not guaranteed. By the time she died in 1603, England was established as a Protestant state and going through a Golden Age culturally and economically and had militarily defeated Spain, the superpower of the day. It is worth noting that the refinancing of England was partly on the back of the buccaneering spirit of Francis Drake and others at sea. Entrepreneurial piracy has echoes of a deregulated Singapore-style economy.

But once Britain’s Protestant identity was secured and its independence guaranteed then Protestantism laid the foundation for the industrial revolution which turned Britain into the world’s economic powerhouse and the creation of an empire built on trade where the sun never set.

In his famous work Die protestantische Ethik und der Geist des Kapitalismus (The Protestant Work Ethic and the Spirit of Capitalism), Max Weber charts how the Reformation and Protestantism led to the wealth creation in north Europe and dynamic economy compared to the stagnant state of the Catholic southern Europe. The breakaway from the centralised power of the church had also led to an appreciation for the power and liberty of the individual which was at the heart of capitalism. The success of the UK and later the liberated USA are testament to this.

The European Union and pre-Reformation Catholic Church are obviously not identical but there are similarities. Both try to put countries into a straitjacket of centralised rules and standards and both lay claim to money and taxes from their member states (for Catholic indulgences read VAT and tariffs for the EU), both had central courts which imposed central rules, both take power away from individual states and give it to a centralised bureaucracy. Politically, both the Reformation and Brexit are attempts to find freedom and wealth by breaking away from the bonds of these stifling imperial systems.

When he was European Commissioner, José Manuel Barroso described the EU as “an Empire” and the attempt by the EU to be a secular version of the Medieval Catholic Church appears to be a perfect example of George Santaya’s view that history is a series of mistakes that we are doomed to repeat. While people may not be talking about Brexit in 500 years’ time as we still remember the Reformation today, the two are similar geopolitical reactions to win back freedom and open up opportunities for wealth creation. The lessons of five centuries suggest that Brexit can bring enormous success but only after a painful process as Britain struggles to decide what its identity should be.