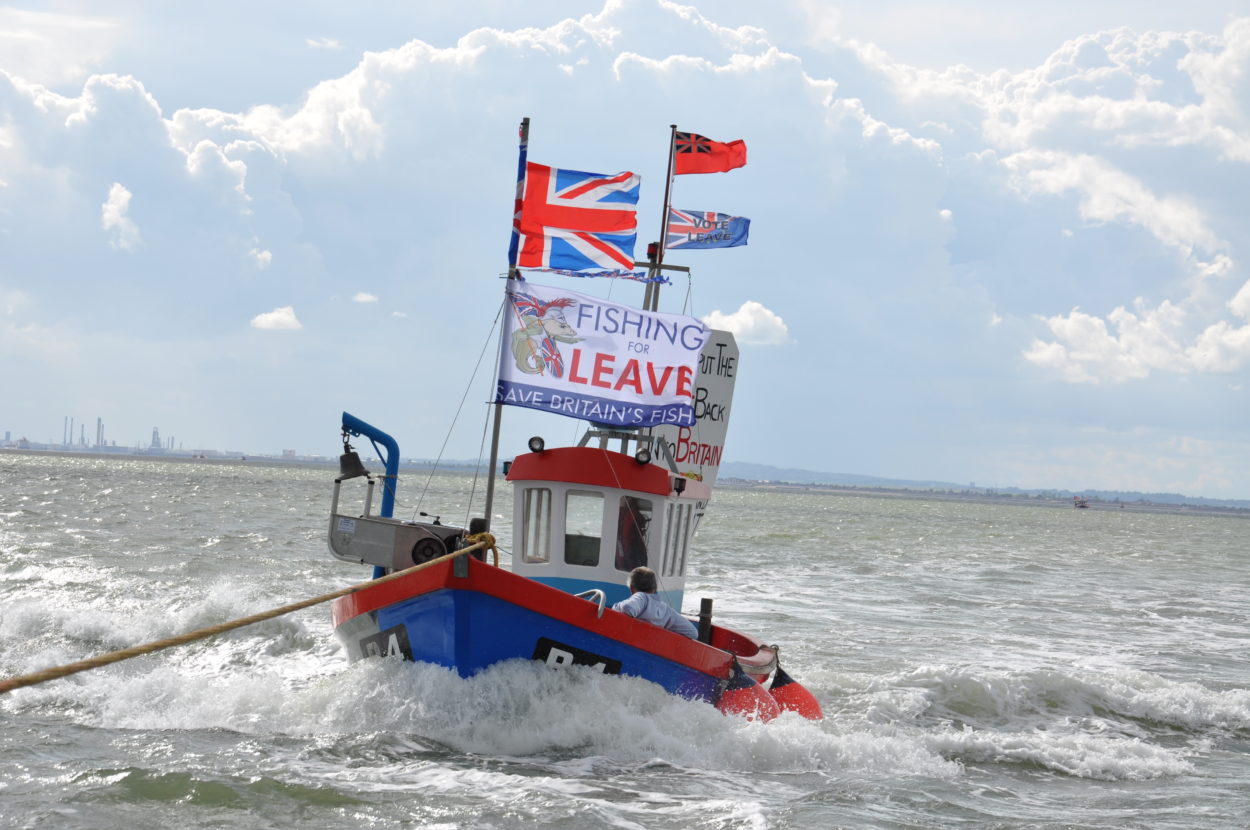 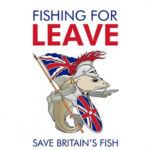 Alan, a skipper of 10 years, is one of the founding members of Fishing for Leave. The campaign group is best known for organising the ‘Battle of the Thames’ protesting against the Common Fisheries Policy during the referendum campaign.

We are finally fast approaching the critical juncture that’s loomed since 2016 – will the Government ensure the UK genuinely ‘takes back control’ of our waters to be a sovereign, independent coastal state no different to Norway, Iceland or Faroe? Or will the Government cave to EU demands on fishing where we have a continuation of the current unlimited access and disproportionately exploitationary quota shares so loaded against the UK?

It is unarguable that British fishing was sacrificed to join the EEC; that the EU making off with up to 90% of quotas on many species (when on average 60% of catches are from UK waters) is little short of robbery; and that the Common Fisheries Policy (CFP) has been inept at safeguarding the environment, fish or fishermen.

47 years of hurt for British coastal communities can begin to be rectified this year with the clean break from the CFP which is provided by leaving the EU, when the treaties, policies and regulations automatically “cease to apply” as per Article 50.

There is huge public expectation to see what has become the “acid test” of Brexit delivered upon. This Conservative Government has the chance to exorcise the ghost of Edward Heath that has haunted them for half a century.

Boris Johnson has vocally stuck to insisting that fishing won’t be traded away as part of a wider deal, saying that would be “a reprehensible thing to do”. With the proof of the pudding fast approaching, whether fishing is saved or surrendered will make or break the Conservatives in a host of coastal constituencies.

The EU’s self-entitled and belligerent demand to continue its fleet’s unhindered exploitation of British waters is expected, but must be squashed. Sadly, this has been made more difficult than needs be by fishing remaining in the terms of the Political Declaration – terms which the Withdrawal Agreement obliges the UK to ratify as the basis of any future trade deal.

These state (Para. 73) that the UK must “establish a new fisheries agreement on access to waters and quota shares…within the context of the overall economic partnership” – effectively linking fishing with trade, something the Government says it will not do…

It says any fishing arrangement should based on “non-discrimination” (Para. 72) – the basic principle of equal access to a common resource. It sets up for a “level playing field” (Para. 21) to ensure regulatory alignment with EU rules. It also prohibits the curtailing of EU freedom of establishment (Para. 29), which has allowed EU-owned but UK-registered “Flagships” to predominate – where they now hold half of the meagre fishing opportunities the UK does get under the CFP.

The Political Declaration also makes provision for the UK to be enmeshed in “associate” membership of EU policies (Para. 120) and may “establish specific governance arrangements” (Para. 118) to do so.

We may not be in ‘the’ CFP, and may well in name be an independent coastal state (as every minister likes to emphasise), but if future arrangements see the UK hide-bound to mimic EU rules and continue unfettered equal access (as the EU clearly intends), then the Government can use what names and semantics it wants. If it walks like a CFP and quacks like a CFP, it is ‘a’ CFP, if not ‘the’ CFP.

Some may say this is the harshest interpretation of the wording, but it’s clearly where the subservient efforts of Mrs May were intended to take us – the Withdrawal Agreement and its Political Declaration and transition period are her Frankenstein. Mr Johnson achieved the bare minimum of changes but it’s still a dire deal and regrettably the totemic fishing industry wasn’t exempted. This leaves many nervous.

Fishing may be hanging on a thread, but it’s not over yet if the Government stands firm on a British interpretation of the Political Declaration wording.

First, the Government can tell the EU where to go as far as linking fishing to trade is concerned – after all doing so wouldn’t impinge on the obligation to “establish a new fisheries agreement on access to waters and quota shares as part of the wider economic partnership”. We’d be establishing a new fisheries agreement as part of the wider deal and sadly for the EU it should be a short discussion – no, nein, non!

Second, following from the first, the new fisheries agreement on access and quotas can be very limited. The Political Declaration doesn’t specify the amount of access or quotas, nor over what time frame. The Government must legislate and ensure that any swap of access or quota only happens when the UK receives a reciprocal value of opportunities in return, and is on a strictly annual basis – no different to how the other independent coastal states of the North East Atlantic interact with the EU and one another.

Third, the Government must not falter from safeguarding the UK’s rightful resources under the United Nations Convention on the Law of the Sea (UNCLOS). The entire CFP and all its access and quota shares “cease to apply” to the UK on exit. The UK will automatically be an independent coastal state with complete exclusive sovereign rights over all waters and resources within its Exclusive Economic Zone (EEZ) as we revert to international law under UNCLOS – the Withdrawal Agreement Transition period till 31st December 2020 sadly negates this for a year as we have agreed to re-obey the CFP after exit until this date.

The key point is that the EU has no legal right to fish in British waters after 2020, nor to claim inflated quotas for resources that are predominantly in British waters. The EU will have to cut its cloth to reflect the loss of British waters from the common EU pot in order to comply with UNCLOS obligations to fish its waters sustainably. The EU has no right or legal standing to claim 90% of Channel cod, haddock and whiting quota nor North Sea herring when 60%-90% of catches are in British waters.

All other nations work on the international principle of ‘Zonal Attachment’ – where a nation has shares of resources based on the predominance of species in its waters. The UK must not falter from the insistence that any access or quota swaps is predicated on the EU cutting its cloth and recognising the UK’ s rightful share of resources under the international principle of Zonal Attachment, as is the case with independent coastal states.

Fourth, the UK must ensure that “non-discrimination” means what it is meant to under the EU’s treaties – that there is no differentiation between the nationals of different member states. The key is that since the UK is no longer a member state, this doesn’t apply to the UK in the sense the EU hopes to contort it to – that there is no discrimination between EU vessels and UK vessels in accessing one another’s waters. This is a non-starter! “Non-discrimination” must only mean that the UK will apply any limited annual access the EU is granted equally to all EU vessels regardless of their member state origin.

Fifth, and most importantly for the ability to rectify the damage to our marine environment caused by the ineptitude of the CFP – so we can husband our waters using the best management and science available as UNCLOS obliges – there must be no adherence to the CFP or its rules in any form under the guise of a “level playing field”.  This provision that seeks regulatory alignment must not be applied to fishing. To genuinely deliver being an independent coastal state, as often promised, we must be entirely free to exercise exclusive sovereignty over all our waters and resources so as to be able to implement bespoke British policy unimpeded by the CFP.

Lastly, the Government must not yield to the EU’s hollow threats on market access for either UK seafood or financial services in return for the ability to continue the EU fleet’s plunder of UK waters. British seafood exports are in high demand in EU markets; the loss of ability of the EU fleet to plunder 60% of Britain’s resources (representing one third of their North East Atlantic catches) will make those markets even more dependent on British exports.

They need British seafood as a diet staple, with many species not readily found elsewhere. The EU and Eurozone also has a critical dependency on the might of British financial markets and the City of London as one of the world’s pre-eminent financial centres. The idea that the EU is going to spite either its financial or seafood necessity on British suppliers to keep their fishing fleet in our waters is a hollow piece of brinkmanship.

Tariffs are not punitive – as recognised by the EU itself. Indeed, currency fluctuations offset them – a weaker pound has already benefited exporters hugely, far offsetting tariffs. The other Nordic countries export huge volumes of seafood despite tariffs, having chosen these rather than sacrifice their fishing independence.

Any threats by French fishermen to cause Channel port disruption should also not be yielded to as Steve Barclay suggested to the Exiting the EU Committee in June 2019. Any blockades would be short term; any British government should never yield to short-term ransom demands and there are alternative routes around French ports which seafood hauliers are preparing to use.

It’s as simple as this. Brexit’s the chance to take back control and rewrite policy to one that works with our marine environment. Policy which will husband our greatest natural resource for generations to come.

Repatriating our rightful resources sees a worth of between £6 billion and £8 billion in processed value, and this is before ancillary industries are accounted for. It’s a huge prize to rural coastal communities and the economy as a whole.

Britain has the full weight of international law on her side and the EU’s own Article 50 entirely abrogates the CFP and all access right and quota shares. We don’t require or need to grant access and should only do so on a limited annual basis and only when a fair reciprocal swap of fishing opportunities is received in return.

Their seafood and financial markets need us more than we need them – seafood and capital flows globally to hungry purchasers worldwide. Immediate port disruption would be a short-term inconvenience when weighted against the colossal opportunity of taking back control.

Politically it exorcises the ghost of Heath that’s been a millstone round Conservative necks. Conversely, a second deliberate sacrifice of British fishing – which is totemic in the public’s mind – would hammer and haunt the Conservatives for decades.

Britain and the Government has everything to gain and it can only be lost through weakness and ineptitude. The acid test has arrived. The Johnson Government will be judged on it – and must deliver for their sake and ours.