Even if the EU will not play ball, our optimal strategy is still unilateral free trade 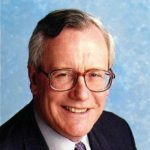 Professor Patrick Minford is one of the UK’s leading macroeconomists and holds the chair of Applied Economics at Cardiff University. He has written extensively about the economics of the European Union and is the chair of Economists for Free Trade.

Mrs May’s eminently reasonable desire to reach a Free Trade Agreement (FTA) with the EU faces a major obstacle, over which she has little if any control: the possibility that the EU will not agree to any such FTA, instead insisting that only full adherence to the Single Market and Customs Union as currently constituted is available, with its existing obligations of free migration and subjection to EU regulation.  There are several variants on this position, such as agreeing to an FTA outside the Customs Union but only with free migration and EU regulation. Any position of this type that insists on free migration and EU regulation breaches the post-referendum ‘red lines’.

There is little point in discussing whether this is likely or not, as we simply do not know. But what is needed is a trade strategy that is optimal and can adjust – regardless to whatever any other country will agree to. And it is clear that the optimal trade policy when others may be protectionist is a unilateral WTO free trade option.

One hundred and seventy years ago, Robert Peel repealed the Corn Laws even though other countries would not consider reciprocal reduction of their agricultural tariffs. He did so following the free trade arguments advanced by Cobden and Bright; as history later showed, Britain led the way in industrialisation, as cheaper food and lower living costs raised consumer welfare and triggered reallocation of resources towards their best use. Trade within the low-tariff British Empire thrived and ushered in lower tariffs by other countries wishing to participate.

The genius of Cobden and Bright lay in explaining that tariffs were self-harm because they simply raised prices internally above world prices, making consumers worse off and distorting the allocation of internal resources. At that time, politicians believed that tariffs gave you more power because they reduced imports and built up your own industry, while if you got others to reduce tariffs you would gain by exporting more and so also build up your industry. This was the doctrine of Mercantilism, which was exactly wrong.

What it ignored was the way in which trade rearranged itself in the long term, given that world trade is highly competitive and goods are priced to make world supply and demand equal. No one country can influence this world price by its tariffs: the effect on world demand is zero or trivial because all it does is reduce demand for, say, corn, from foreign suppliers and switch it to home suppliers. But the total demand for corn worldwide is the same! So the world price is the same and all that happens is home prices are raised by the tariff. This rise in home prices makes consumers worse off, and causes resources to flow into the protected industry, and away from other industries where they would be better used. This is indeed self-harm.

For the UK we have estimated this harm from the trade barriers which the EU has hitherto levied on our behalf on food and manufactures at no less than 4% of GDP, with an equal fall in consumer welfare; it has done this by raising consumer prices by 8%. Much ink has been spilt by Remain factions on studies by other modellers who calculate losses for the UK under the WTO option, but I and others have explained at some length how these studies a) in some cases used implausible models, such as the ‘gravity’ model where a country’s trade faces quite limited long run competition from the world market, and b) used highly damaging assumptions about Brexit policies, especially that the UK would adopt protectionist trade barriers against the EU and the Rest of the World.

If the EU refuses to do an FTA in which it cuts its tariffs on us to zero in exchange for our doing the same with our tariffs on them, we should refuse to go down the route of ‘tit-for-tat’ and simply eliminate our tariffs on them, and by implication – under WTO rules – on everyone else. By doing so, we would achieve free trade for our consumers with one quick move. Line 1 of the Table shows the gains of this strategy which recover that 4% loss from existing EU protectionism. Liam Fox will still have plenty to do agreeing much broader FTAs around the world on such things as property rights, public procurement and investment treatment.

*Achievable either via Unilateral Free Trade or with FTAs over time. Source: Minford & Miller (2017)

Line 2 shows what happens if we manage to do FTAs with the rest of the world but not with the EU, so that we keep our manufacturing tariffs on the EU. Our abolition of the EU’s non-tariff barriers and of our CAP participation, plus the signing of FTAs around the world eliminating our tariffs on non-EU countries, will gain us half that 4% rise in GDP from the full free trade position of line 1. Notice that we can achieve Line 2 by doing FTAs with major supplier countries of food and manufactures around the world: we could call it the FTA route to free trade. Then, to get to Line 1, we could cap it off by gradually eliminating our tariffs to the rest, including the EU. The Line 2 route to free trade can get us to the same place as Line 1, but it takes longer.

Furthermore we must assume that the tariffs and other levies of the CAP are indeed abolished in the UK. Line 3 shows the disastrous effect on the economy of our pursuing tit-for-tat, including the retention of all the agricultural tariffs, while also failing to negotiate any FTAs with the rest of the world. GDP plunges by 4% and consumer prices barely fall. This is the strategy assumed by the Treasury when it ‘costed’ Brexit – no wonder it shouted ‘disaster’, but why the lousy assumption?

What we see here is that the free trade aims of Mrs May’s government can be achieved whether the EU agrees an FTA with us or not, either by moving rapidly on FTAs with others and then gradually removing any remaining tariffs or by simply removing our tariffs on all from the start or, if FTAs are sticky to get done, at any point along the way.